Questaal’s basis functions consist of augmented waves : smooth envelope functions with holes punched out around atoms the smooth envelope replaced (“augmented”) by numerical solutions of the Schrodinger equation. These numerical solutions are very accurate, so basis incompleteness mostly originates from the envelope functions.† This page is concerned with a new construction for them, the Jigsaw Puzzle Orbitals.

Jigsaw Puzzle Orbitals (JPOs) have a number of highly desirable properties of a basis set.

In the figure on the left, the JPO envelope functions are shown for s and p orbitals in a 1D model with two atom centers.

At points where the envelope functions and augmented functions join, the function value is unity on the head site ( or on the left, and or on the right) and zero on the other site. (By unity we refer to the radial part of the partial wave; the full wave must be multiplied by , which for p orbitals is depending on whether the point is right or left of centre.) Moreover, the kinetic energy is tailored to be continuous at the head site and vanish at the other site.

These two facts taken in combination are very important. Consider the Schrödinger equation near an augmentation point. Inside the augmentation region, the partial wave is constructed numerically, and is very accurate. It is not quite exact: the partial wave is linearized, and the potential which constructs the partial wave is taken to be the spherical average of the actual potential. But it is well established that errors are small: the LAPW method, for example, considered to be the gold standard basis set for accuracy, makes the same approximation. Since the kinetic energy is continuous across the boundary, the basis function equally well describes the Schrödinger on the other side of the boundary, at least very near the boundary.

This alone is not sufficient to make the basis set accurate. Tails in some channel from heads centred elsewhere will contribute to the eigenfunction. They can “contaminate” the accurate solution of the head. However, consider the form of the Schrödinger equation:

By construction both value and kinetic energy of all basis functions vanish except for the single partial wave that forms the head. Thus any linear combination of them will yield a nearly exact solution of the Schrödinger equation locally. 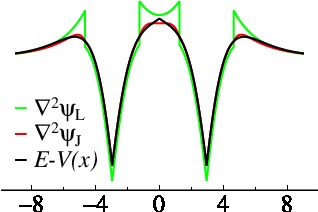 In the 1D model described above, a the JPO basis was applied to double-exponential potential well shown in black in the Figure on the right. The kinetic energy of a traditional smooth Hankel (green) shows a discontinuity at the augmentation boundary; with JPO’s the discontinuity disappears (red). The JPO kinetic energy is everywhere very close to the exact solution (the exact potential and kinetic energies lie on top of each other).

In many respects, JPOs are nearly ideal basis functions: they are close to being as compact as possible for solving the Schrödinger equation in a given energy window. JPO’s have two important drawbacks, however:

To date we have succeeded in rotating Questaal’s standard basis functions (convolutions of Hankel and Gaussian functions) into a screened form; see Section 3.12 in the Questaal methods paper, Ref. 3) This basis set spans the same hilbert space as Questaal’s traditional basis — good, but not optimal.

The figure on the left shows screened envelope functions, , , , , and , for a zincblende lattice. They resemble a traditional Slater-Koster form (having pure character), making easy identification with an atomic orbital. 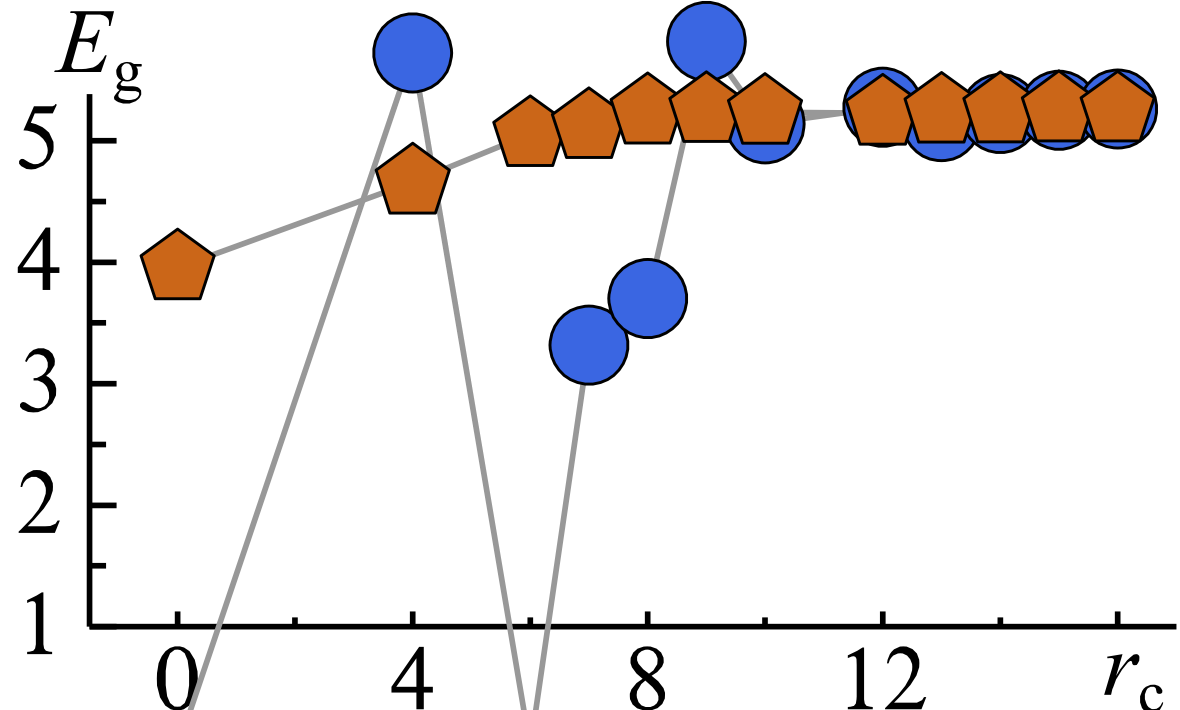 The figure on the right shows the bandgap‡ in NiO calculated in the Quasiparticle Self-Consistent GW (QSGW) approximation, comparing Questaal’s traditional basis and a screened form. The bandgap is plotted as a function of the cutoff in the QSGW self-energy for traditional envelope functions (blue) and screened basis set (orange). The first point contains onsite terms only, the second adds first neighbours etc. The conventional basis shows erratic behaviour until at least the fourth neighbours are present. JPO’s converge quickly, because their range is smaller than the range of the physical , so what the evolution of the gap is a reflection of the nonlocality in the .
It is seen to be relatively short-ranged, but not confined to a single site which theories such as LDA+U and LDA+DMFT assume.

The final step, making the kinetic energy everywhere continuous, slightly perturbs the shape and should significantly improve its accuracy.

References and Other Resources

† This remark must be qualified. A basis set that is nearly perfect in describing a local potential may still be incomplete in important ways. On particularly important example arises in the context of many-body theory. A cusp appears in the two-particle wave function as , because of the singularity in the coulomb potential . Smooth functions have difficulty approximating this cusp. Treatment of forces and phonons are another context: as the nucleus moves, the basis must shift with it because the partial waves are tailored only to solve the Schrodinger equation when the nuclear potential is not displaced. These are sometimes called “Pulay” corrections.

‡ The QSGW bandgap is slightly larger than 5 eV, as shown in the original paper describing Quasiparticle Self-Consistent GW (Phys. Rev. Lett. 93}, 126406 (2004)), larger than the experimental gap of about 4.3 eV. Including ladder diagrams in W reduces this gap close to the experiment, as will be shown in a paper by Brian Cunningham and co-workers.