Exact Diagonalization solver works well for small temperature and small number of orbitals. is perfect. More it depends of the symetries.

It has several steps :

The input files could be downloaded here

First run lmfdmft as usual. it will create the file solver_input.h5

Then create the params file :

you need to have a file called params which contains :

Then use lmed to generate the input file of Cedric’s solver from solver_input.h5.

it will create the folder imp_i (i=0:ncix-1). In this example we have 1 correlated block so it create imp_0. In this folder, there are :

The second command run the solver, it should take few minutes for this example. The last command will read the output of the ED code and write it in sig.inp. Then use lmfdmft as usual

An example of script to run the dmftloop is given in dmftloop.sh

In practice, above is a bad fit. below is good. This number depends of the number of points integrated in the fit which is controled by fit_nw in ED/ED.in.

The quality of the fit could also be improved by increasing min_all_bath_param in ED/ED.in which controls the number of sites in the bath. It always a good idea before starting a full dmft loop to try several values of min_all_bath_parma and see how the result improved. An example is given on figures : 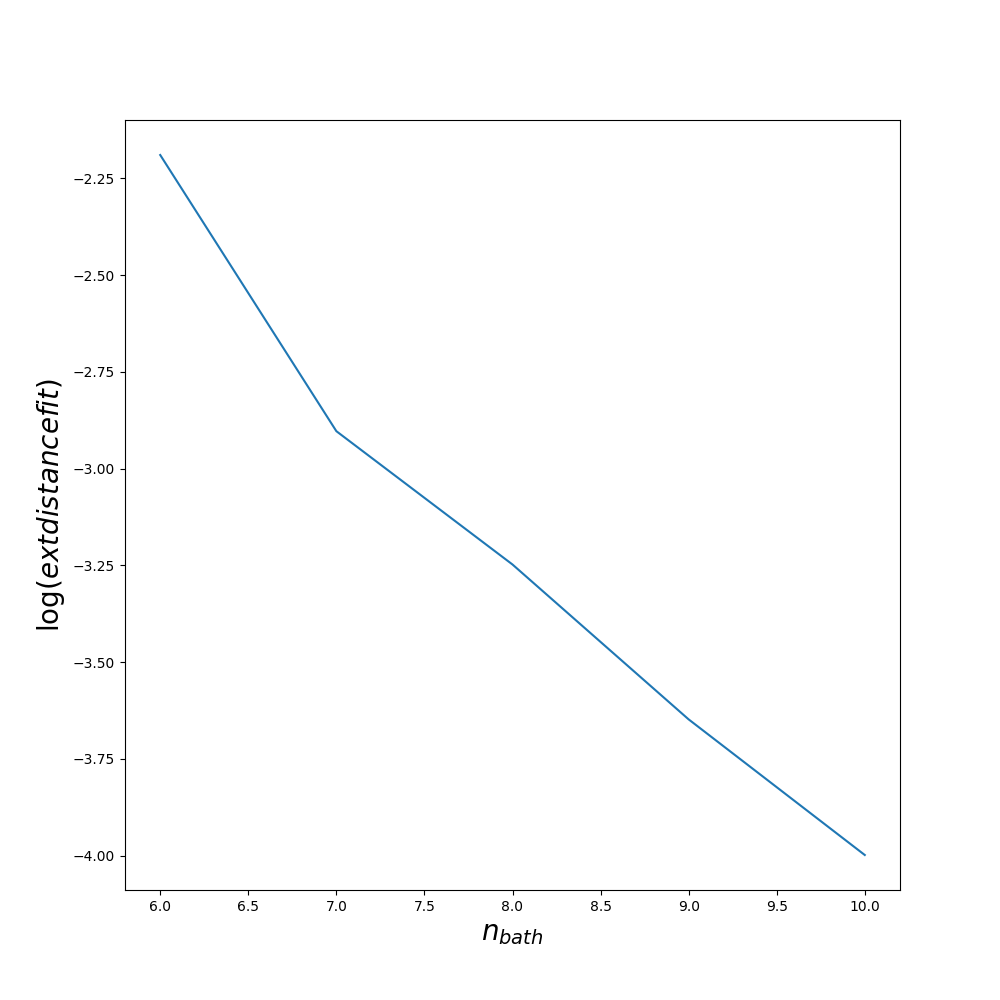 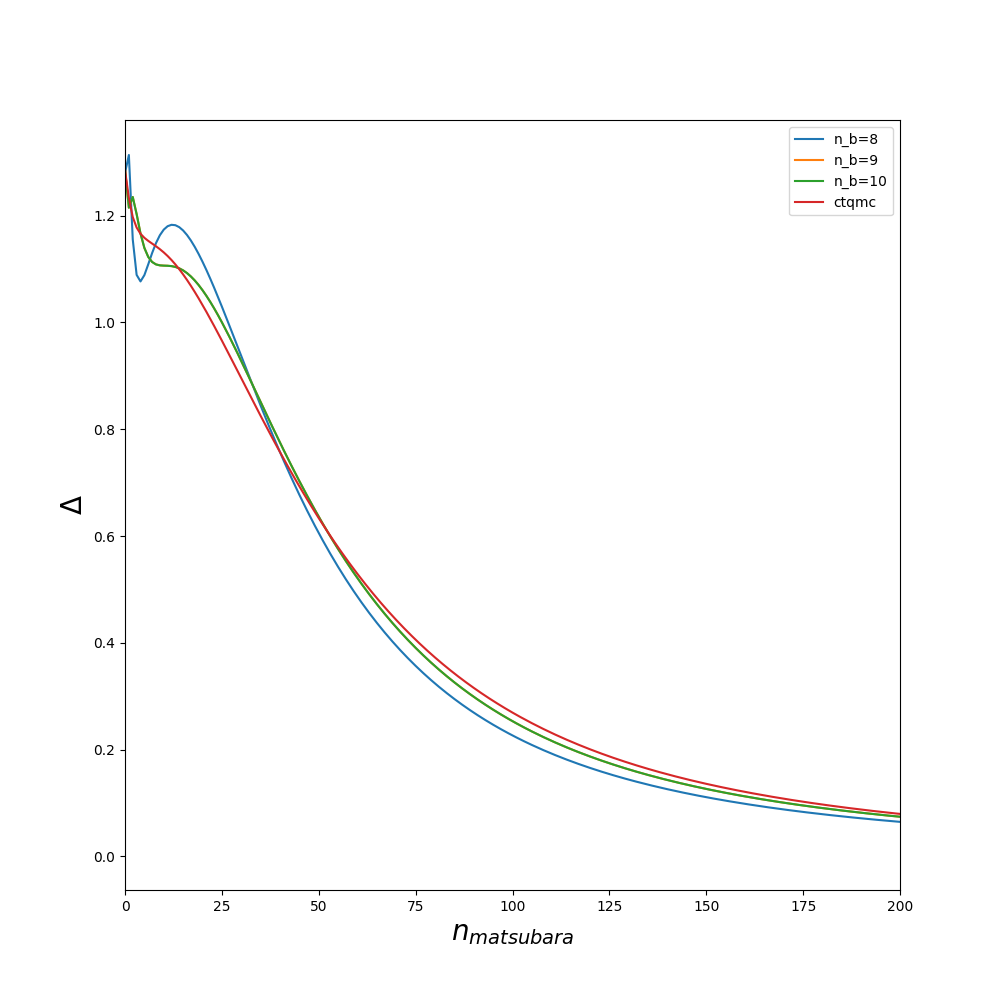 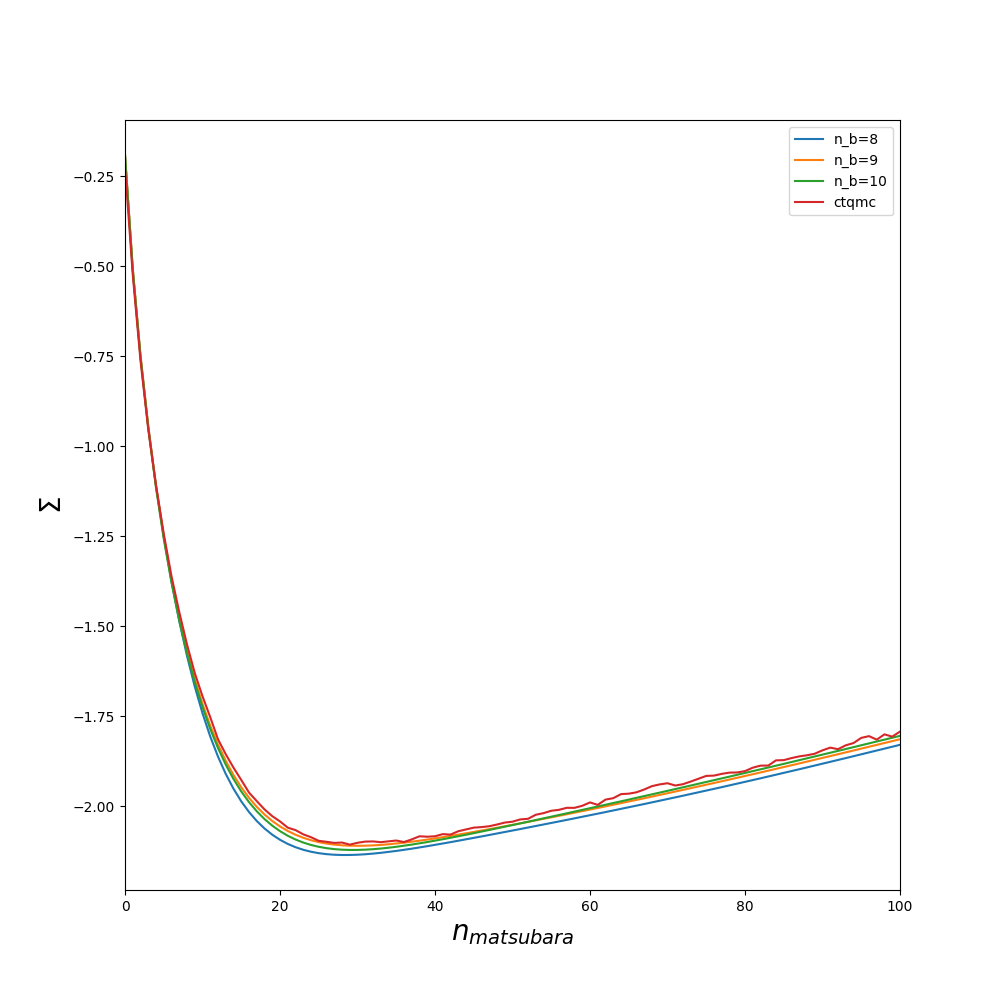 The Lanczos diagonalization is a great methods but should be use with caution. It is always good to play a bit with the parameter to be sure that the result is valid.

Then increase the number of baths and look for ‘E0 =’ in the logfile-p1. It shows the energies for the different block. First you want to make sure that the code take into account some excited state. If not, you should increase Neigen to make it equal to 2 and increase dEmax0 which controles the maximum difference between ground state and excited state.

Sometime, dEmax0 is to big with Block_size=-1 and result is bad. It is difficult to see it without a benchmark. Having a ctqmc benchmark is usefull in this case (It could be benchmarking without interband hopping for instance to avoid the sign problem). I would recommand to avoid using Block_size=-1.

“lmed ybco –init” reads at each iteration the params file but does not overwrite ED/ED.in. It means that if someone configure ED/ED.in, for the first iteration, lmed –init will just modify and .

The susceptibility works only on mode FULL_ED, So . The computational cost grows as .

First modify ED/ED.in (at the end of the file), to be on the mode FULL_ED and

Then run ed_solver and check if the self energy is not to far due to the small number of site.

If it is ok, create a file called mesh

The important number is demax0 since Neigen is set to a very large number. The code will include eigenstate up to an . if , in this case, , which is probably ok. The convergence of the result w.r.t this number should be checked. If it is too small, the tail of the vertex will not converge. The computational cost of the calculation grows as . As a remark, depends of the number of bath site.

Then, run vertex_ed. It can be run with openmpi/mpi. This part can be very demanding and, in general, need large cluster.

return to the main directory

The roaming mode for the fermionic grid is enabled.

The vertex can be dumped in chiSQ.h5 with