Copper sulfide nanocrystals have have a metal-like behavior and strong plasmonic response, which make them an attractive for nanophotonic applications in the near-infrared spectral range; however, the nature of the plasmonic response remains unclear.

Researchers in this ACS Nano paper performed a combined experimental and theoretical study of the optical properties of copper sulfide colloidal nanocrystals and show that bulk CuS resembles a heavily doped p-type semiconductor with a very anisotropic energy band structure. As a consequence, CuS nanoparticles possess key properties of relevance to nanophotonics applications: they exhibit anisotropic plasmonic behavior in the infrared and support optical modes with hyperbolic dispersion in the 670−1050 nm spectral range. They also predict that the ohmic loss is low compared to conventional plasmonic materials such as noble metals. The plasmonic resonances can be tuned by controlling the size and shape of the nanocrystals, providing a playground for future nanophotonic applications in the near-infrared. 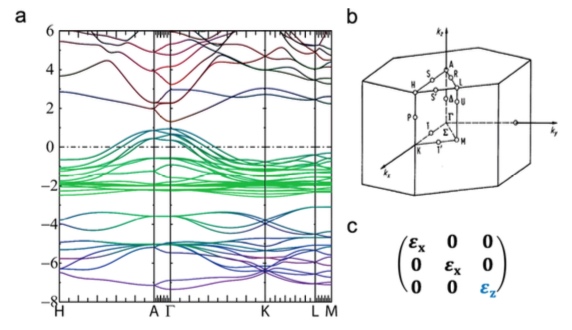 Left: Electron band structure of covellite CuS calculated in the QSGW approximation. Colors depict the orbital character: red, green, and blue indicate projections onto Cu s + S s, Cu d, and S p states, respectively. All other orbitals are black. Also shown are the CuS crystal structure in reciprocal space and the anisotropic form of the macroscopic dielectric function .