Why first-principles descriptions of correlated systems are sometimes needed

First-principles approaches have been successful in solving many-body Hamiltonians for real materials when correlations are weak or moderate. For strongly correlated systems, model Hamiltonians (especially the Hubbard model) are widely used. They are ubiquitous because of their relative simplicity: the essential features of a physical phenomenon of interest can be elucidated without the encumbrances and unnecessary details a “first principles” approach entail, making it much easier to identify key parameters in the model which govern the property of interest. Not least, model Hamiltonians are more tractable, which greatly facilitates extracting physical observables.

Models such as the Hubbard Hamiltonian do indeed contain, within some region of parameter space, key many-body effects such as the metal-insulator transition, pseudogap phases, quantum criticality, and both conventional and unconventional superconductivity. Thus, applications of this model has become the canonical approach to characterizing such phenomena. However, its limits become apparent when the high-energy scales that control parameters for the low- energy ones are nontrivial. High-energy scales contain information about chemistry and disorder specific to real materials: they have a marked effect on the low-energy scales and cannot be integrated out without model assumptions. First principles theories in principle contain this information, and can potentially distinguish which models are applicable, and the significance of the physical mechanisms they omit.

Yet their application to strongly correlated systems has been limited. In weakly correlated materials, first principles approaches tend to predominate because they rely on a minimum of model assumptions, and are often predictive. This is not the case when correlations are strong because standard methods, usually based on extensions of density functional theory (DFT), lack the sophistication to encapsulate the strong spin and charge fluctuations, or the fidelity to characterize one-particle properties near the Fermi level (which are essential to capture low-energy excitations characteristic of correlated systems); nor are they adequately equipped to generate the (two-particle) susceptibilities.

FIG 1. (Taken from Ref. 4) How the choice of reference affects the GW approximation to ionization potential of 3d transition metal free atoms (top) and the heat of formation ∆E of a TM-O dimer (bottom). In the Quasiparticle Self-Consistent GW form, the ambiguity is eliminated since the reference is determined by the method itself. Thus it surmounts the "second principles' flavor of GW. Furthermore the reference is optimally chosen; so discrepancies with experiment are more uniform, and most of the error can be identified with diagrams missing in the theory. The text provides some examples.

Low-order many-body perturbation theory, for which the GW approximation is the leading diagram, is usually evaluated as a perturbation relative to a reference system (most commonly DFT), and it is sometimes called G0W0. G0W0 uses a higher-order theory to improve on the reference low-order Hamiltonian, and in that sense it is similar to the embedding approach. These two approaches improve on the reference in different ways — one as a weak nonlocal perturbation, the other as a nonperturbative but local correction — and are used for different purposes. Nevertheless both methods depend on the reference, which may be arbitrarily constructed, there is ambiguity in the result. In this sense, both are “second principles” methods. Fig. 1 shows how the choice of reference affects physical properties for transition metal (TM) atoms and TM-O dimers; thus even though G0W0 is generally regarded as a “first principles” method, it has a second principles flavor.

The self-energy Σ, together with the noninteracting part, determines the one-body Green’s function G, and thus properties derived from it. The success of second-principles methods, is commonly measured by the quality of Σ which is either a function of energy or momentum or both. Its quality is assessed by comparing against observables that are derived from G such as those in Fig. 1. However, Σ alone is not an adequate measure of the theory, and it is the primary aim of this post to establish contexts where it is not adequate.

FIG 2. Energy bands of the undistorted P3m1 structure.
(a) Solid lines are LDA results, with red and green depicting a projection onto Ti and Se orbital character, respectively. Blue dashed line shows bands calculated from LDA-based G0W0.
(b) Blue dashed line shows bands with same self-energy as in panel (a), with an extra potential ΔVLDA deriving from a density shift computed from the rotation of the LDA eigenvectors from caused by the difference between the the LDA exchange correlation potential and Σ. Solid lines are results from the Quasiparticle Self-Consistent GW approximation, with the same color scheme as in panel (a). Taken from Ref. 5.

TiSe2 is a layered diselenide compound with space group P3m1. Below 200 K, it undergoes a phase transition to a charge-density wave (CDW), forming a commensurate 2 × 2 × 2 superlattice (P3c1) of the original structure. A number of works have tried to determine the energy dispersion around the Fermi level in both phases with a special focus on the gap (whether positive or negative) between the Se-4p valence band at Γ and the Ti-3d conduction band at L (Fig. 2). For P3m1 there is no consensus whether the gap is positive or not, though there is a consensus that the low-temperature CDW (P3c1) phase, has small, positive gap (~100-150 meV).

Ref. 5 repeated the LDA-based G0W0 calculation (GLDAWLDA) of Ref. 7 and found a similar result (Fig. 2a). However, as Ref. 5 shows, the positive gap is an accident of the GLDAWLDA perturbative approach: when changes in the density are taken into account, the Γ-L gap becomes negative as in the LDA (Fig. 2b), even while the direct gap at Γ is “positive” (i.e. Ti(d) lies above Se(p)), whereas the LDA gets the topology wrong. It is rather remarkable that the Quasiparticle Self-Consistent GW (QSGW) result looks strikingly similar to GLDAWLDA + ΔVLDA. (Here  ΔVLDA is an approximate correction to GLDAWLDA  originating from modification to the one-body potential causes by rotation of the eigenfunctions.) This indicates that self-consistency doesn’t modify Σ too much; rather, most of the changes self-consistency brings modify the Hartree potential from density changes. TiSe2 is rather unusual: typically self-consistency tends to increase the bandgap relative to GLDAWLDA, because the LDA gap is too small, making W too small. 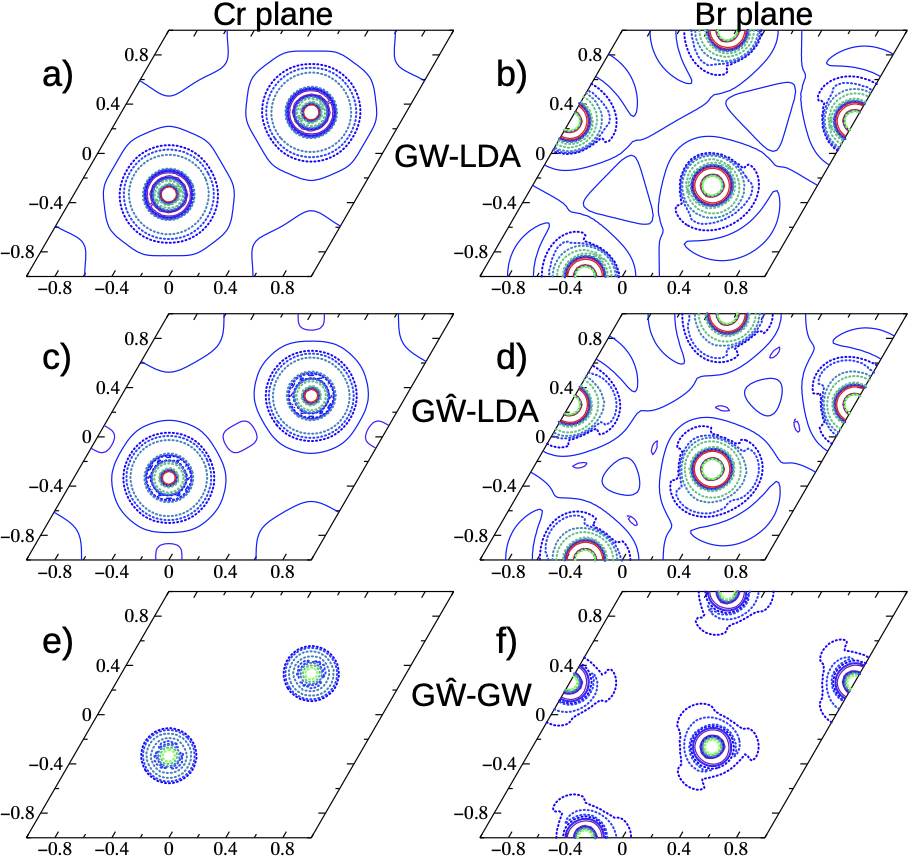 FIG 3. Real-space charge densities (ρ) of CrBr3 of the highest valence band state with the abscissa and ordinate x and y. All the left panels (a, c, e) pass through a Cr plane and right panels (b, d, f) pass through a Br plane. Panels (a, b) display constant-amplitude contours for QSGW ρ after subtracting out the LDA ρ. Contours are taken in half-decade increments in ρ, with a factor of 300 between highest contour (red) and lowest (blue). Panels (c, d) show the change in ρ passing from LDA to QSGW eigenfunctions; panels (e, f) show the corresponding change passing from QSGW to QSG&#372. In the bottom four panels (c–f), blue → red has a similar meaning as in the top panels (increasing positive δρ), while contours of negative δρ are depicted by increasing strength in the change blue → green.

Self-energy effects in CrBr3 also modify the band structure. We compared QSGW to density-functional theory, also to QSGW with a ladders added to W (W→Ŵ). The QSGW density is significantly different from the LDA one, but remarkably the addition of higher order ladder diagrams also modifies the density, not just the the quasiparticle spectrum. The density change modifies the one-body part of the potential, which in turn affects the shape of the valence band, including the position of the valence band maximum.

Rotation of eigenfunctions also has a significant effect on those at the band edges, changing their orbital character. This affects the exciton structure, and how the excitons respond to applied fields. This will be taken up in a later post.

Self-Consistency in Σ : CoPS3 as a case study

Intercalated FeSe: how the vertex is essential to understand superconductivity


« Origins of Superconductivity in FeSe
Archive