An efficient, high-fidelity scheme to obtain the properties of a localized defect embedded in an otherwise periodic host

The quasiparticle self-consistent (QS) GW approximation offers a high-fidelity alternative to Kohn-Sham density functional theory (DFT) for obtaining quasiparticle energies from their eigenvalues by means of an energy-independent and Hermitian self-energy.

Nonetheless, GW theory has not yet found widespread applications in defect studies. This is at least in part due to the large computational effort required for GW calculations. In particular, the latter is challenging for the large supercells needed to represent defects adequately. Thus, there is a need for improving the efficiency of the GW approach, eventually at the cost of some simplification, to make it applicable to larger systems, or systems without periodic boundary conditions.

Our goal with this project, (published recently in Phys. Rev. B) was to explore whether the GW self-energy of a defect system could be constructed from that of the host and the defect site itself or its immediate neighborhood without having to carry out the expensive full GW calculation for the large unit cell required to adequately represent a defect.

Typical defect calculations of today employ semi-local generalized gradient approximation (GGA) or local density approximations (LDA). The infamous gap underestimate of these approaches can lead to serious errors in defect calculations. Defect levels, which should be in the gap may end up in the band continuum. This also affects the total energies and therefore transition levels if one considers charge states in which that defect level (now a resonance in the band) is given an extra charge because in the calculation that charge is actually placed in a delocalized state at the bottom of the band rather than in the defect level. This can be partially resolved with mixed functionals, nonlocal functionals such as the HSE functional of Scuseria et al or LDA+U, or the NLEP scheme of Lany and Zunger, but there are inevitable ambiguities. Such functionals are tuned to work for particular systems, but all of them are essentially ad hoc extensions of DFT to reproduce a few properties. None has the rigorous formal structure or consistently high fidelity of QSGW. 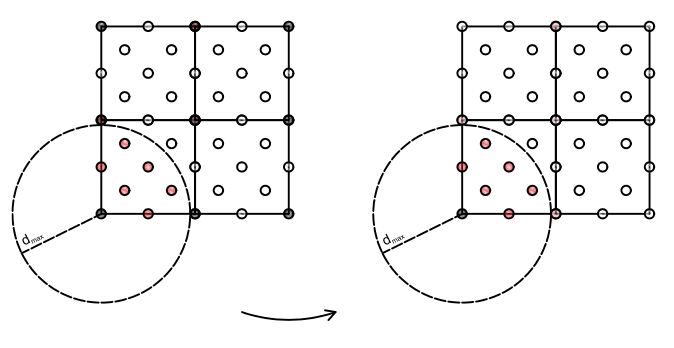 FIG 2: Density-of states of a 128 atom supercell of GaAs with a single As antisite for an unrelaxed lattice (black), and for a lattice whose nearest neighbors were relaxed (red). Energy zero corresponds to the Fermi level in both cases, and sits at the top of the (doubly occupied) midgap EL2 level. It has a dispersion of about 0.3 eV in the 128 atom cell.


FIG. 2 shows the DOS of a 128 atom cell, half the size of the largest cell considered in this work, which widen the neutral EL2 defect level to about 0.5 eV. The center of gravity remains unchanged, so the 128 atom cell is adequate to identify the level position.

As shown in the figure, relaxation of the lattice around the cell has a non-negligible effect, shifting the EL2 by about 0.3 eV.

The Table shows the band center of neutral EL2 defect, in eV, relative to the valence band maximum, embedded in a 128 atom cell. Two calculations are shown: the first allowing no lattice relaxation, and the second including it. QSGW is well known to slightly overestimate gaps in semiconductors3. This is because of the omission of ladder diagrams in the RPA, and if they are included in the screened coulomb interaction W the overestimate becomes very small or even slightly negative4. It is possible to include them, but the correction is not large. A simpler semi-empirical approach is to take a hybrid of 80% QSGW and 20% LDA. The hybrid approach was systematically studied by Deguchi et al. in sp semiconductors and found to be quite reliable.5

The Table shows both straight QSGW results and hybrid results. In both cases, the EL2 falls almost exactly at midgap (0.8 eV for QSGW, 0.7 eV for the hybrid case). Experimentally, it is known to fall at midgap, at 0.7 eV. Thus when relaxations are taken into account, the theory predicts the position of EL2 with the same fidelity as it does periodic systems3.